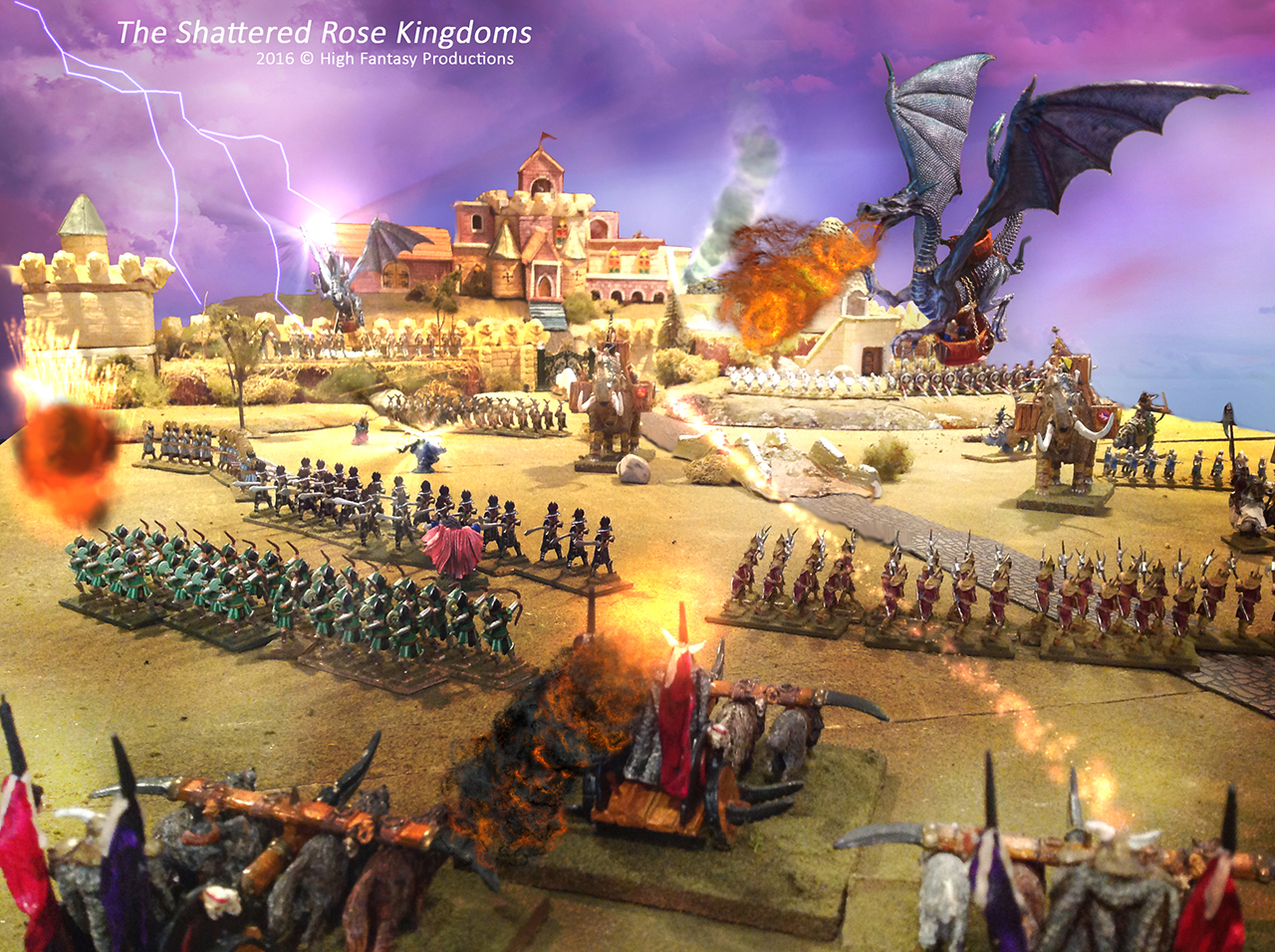 When the world of High Fantasy began the Western Kingdoms were equal in every way to the Eastern Empire.  It was through a series of land battles and adventures that changed this and created the world’s rich history.  All this happened long before the first book was ever published.

There were three great land battles that took place using the Lords of Conquest rules that were later published in Adventures in High Fantasy.

The first great battle was a three day struggle between Lord Obloquy and the Rose Kingdoms.  Unlike the East the Western Kingdoms were no more than a collection of separate fiefdoms.  When the dark army marched on the Rose Kingdoms no other Kingdom came to their aid, as was the tradition.  Only one tribe, the Mountain Magi, came to fight alongside the Rose Kingdom.  The magi arrived with their giant elephants, magic users, and the neighboring hillsmen.

The exact details of the battle will have to wait to be told in another book.  But the key to the Rose Kingdoms’ defeat started when one of their most noble order of Knights began to falter.  Even though these knights faced equal odds on the battlefield, their morale failed (a series of unlucky die rolls) and they routed, fleeing the battlefield.  This left the flank of the Rose Kingdom’s army exposed and the Eastern Army quickly began to outflank and surround the West.

The final turning point came when the Eastern Wizards took advantage of the magical spirit of the Mountain Magi.  These creatures and the hillsmen that accompanied them have such a love for life that the Eastern Wizards found a way to use this against them.

On the eve of the second night of fighting the Eastern Wizards called to the great mastodons and their riders, that had been killed days before, to return with the promise of a new life.  When the spirits agreed they did not realize that their new life came with a price.  This time they arose to fight for Lord Obloquy.

The Rose Kingdoms fell.  The once noble order of knights became known as the “Purple Pud” because of their purple cloaks and cowardice.  And this is true, despite equal odds, they also fled the battlefield in two other land battles that followed.

When the battle was over and the Rose Kingdoms were shattered the players for the West (from Indiana), who lost the battle, did the only thing they could think of at the time.  They carefully constructed a letter begging a neighboring state (Ohio) to send reinforcements.

Truths in High Fantasy Publications Hidden In the Books!

Bacchus is the god of wine.

Rocaltz is the inventor of the High Fantasy drink of choice. Always a little too “tipsy” to write down the exact mixture or to get the spelling correct, this drink is powerful enough to knock Bacchus on his behind. Adventures in High Fantasy – page 84, and served in reputable taverns in towns like Goldchester, page 20.

Holding Hands with a Dragon?

On the Cover of the Original High Fantasy Publication

From the beginning in 1978 the author was a big fantasy animal rights advocate and formed the group PETAD. That stands for Players for the Ethical Treatment of All Dragons. To the author, it just seemed wrong to hit every dragon you meet even if it was fun. Although the organization never caught on directly, a similar organization called PETA was formed two years later. You connect the dots.
(Maybe not completely true.)

It slices, it dices, it chops! Yes, a great magical sword found in the original High Fantasy book was named after the 1970’s info commercial. You can read about it in High Fantasy, page 64. They were just too similar to resist. Inspiration can come from anywhere.

Ptatonkel (a fire god) is a campfire girl!

Most of Life's Problems can be solved with a bigger sword.

ERU makes a mental note, “Must get a bigger sword.”